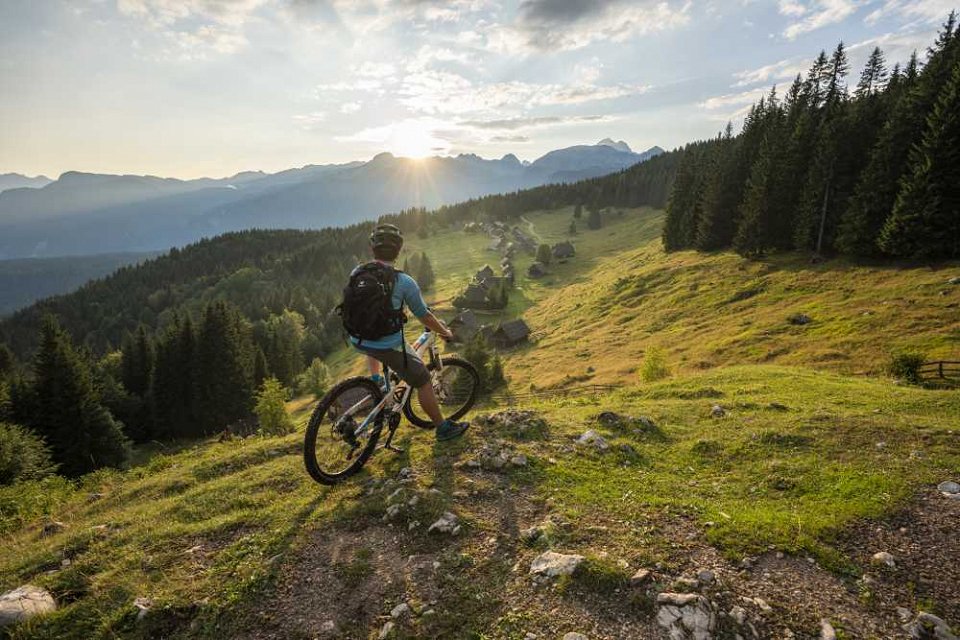 When thinking about mountain biking holidays, most of us think of how to get comfortable first – in a bicycle-friendly hotel, apartment, glamping, camp ... –  and from there we can explore trails in the surrounding area for at least a week. At the same time, you might find your favourite spot for dipping, a restaurant and a beer tap, and make friend with the repairman at the local bicycle shop by force of circumstances ... You know how it goes.

Whereas others are driven by some old and forgotten nomadic genes. To cycle the distance, see as much of the varied landscape and the places, and finally to reach the destination triumphantly. Long-distance cycling tours are being created for such nomads across all the Alps and elsewhere in Europe and the world.

Be it the bikepacking style with transporting everything you need for staying the night outdoors, or going from one bed to another and a roof over your head, you will certainly salivate with everything that the Juliana Bike Tour (JBT) offers. 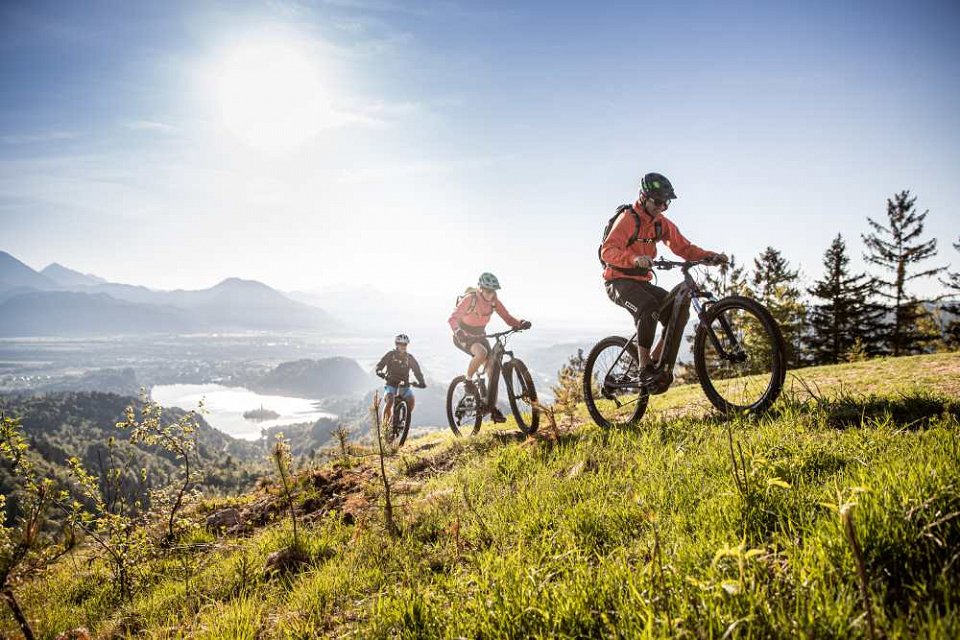 Bled is the ideal starting point for tackling this guided or self-guided tour. Due to its unique nature, this place is one of the neuralgic must-see tourist hotspots in the world, where every true cycling traveller must leave the impression of their profiled tyre in the old, postglacial ground.  The expression of the natural picturesqueness of Bled is spilling over the entire landscape, which is embraced by the Juliana Bike Tour trail. Bled as a traditionally welcoming place offers suitable accommodation, excellent culinary corners and also specialised shops and bicycle repair shops in places only a few minutes away.

The Juliana Bike Tour is the cycling version of the footpath Juliana Trail which was named after the Julian Alps, the eastern part of which represents the highest mountains in Slovenia. We are talking about a 7-day-long cycling journey, relatively technically undemanding, for this reason we can tackle it with full-suspension allmountain bikes as well as with trekking (less recommended) or gravel bikes. From the point of view of endurance, the trail on which we will have our adventure is more demanding and thus comparable with similar European trails, since we have to cycle a little less than 300 kilometres with almost 8,500 metres of ascents.  A digital guide is available on the Outdooractive web portal, and a map is also available in the Triglavska roža tourist office and at tourist service providers. The main JBT trail is marked with light blue directional boards. 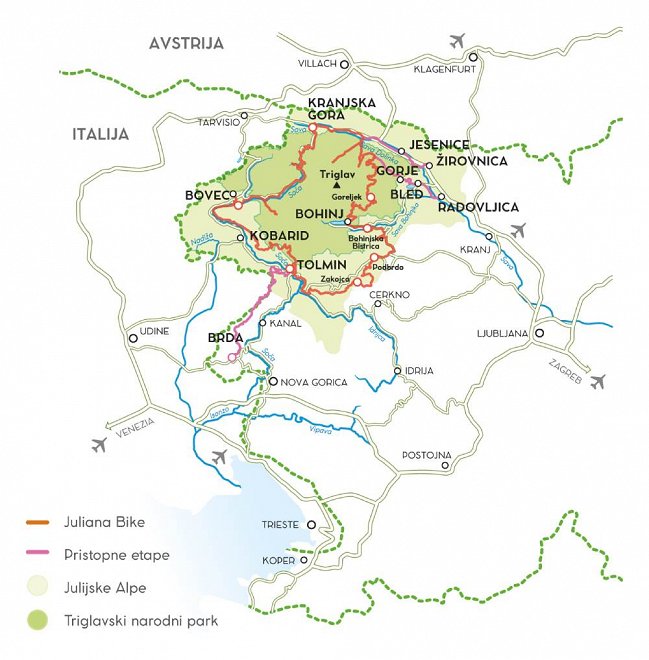 To the terrain configuration, it is recommended to tackle the trail counter clockwise. Experienced cyclists, who do not have problems with orientation, can also tackle it from the opposite direction. In Kranjska Gora we will get closer to the tri-border with Italy and Austria, and on the other side of mount Vršič the gorgeous Soča river will cool us until we arrive to the town of Most na Soči. More demanding mountain bikers may visit bike parks and single trails in Kranjska Gora and Robidišče under mount Stol near Kobarid, and add to their adventure descents on trails which will test their suspensions.

In order to discover more spicy side paths of the JBT, we recommend renting local long-distance cycling guides, since all these gems cannot be included in one article. 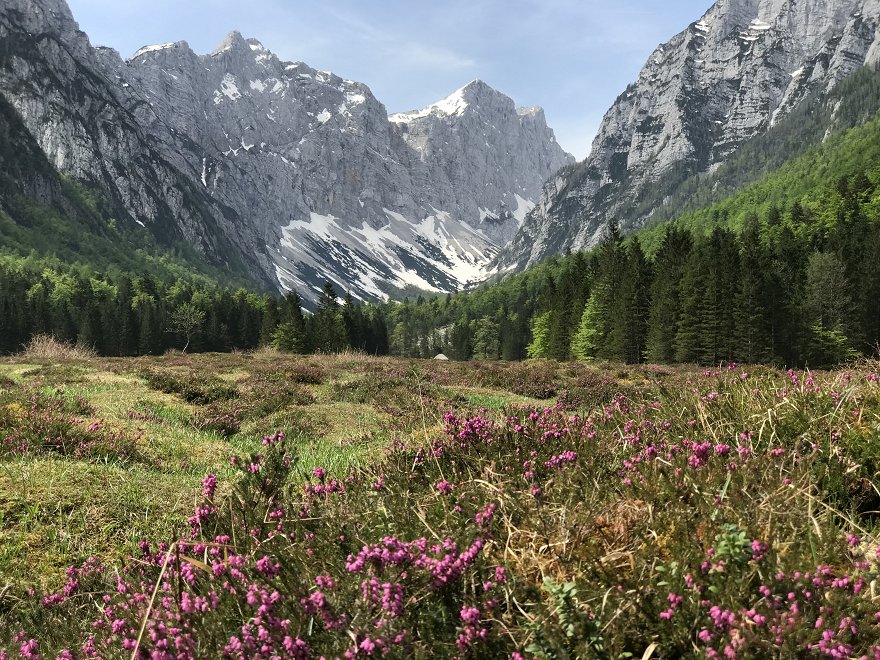 The trail starts in Bled and leads across a glacial moraine in the village of Gorje into the valley of Radovna toward Mojstrana, where the Slovenian Alpine Museum is located (worth visiting). The path is not marked from Bled to the valley of Radovna; however, you may download this gpx file and install this gpx file to your navigational devices, and a map of the area where the cycling trails are marked. From the centre of Bled you will reach the trail in less than an hour. Then follow the light blue directional arrows marking the JBT trail.

In Mojstrana we enter the Sava Dolinka valley, across which we reach Kranjska Gora, another gem known to the world for its ski race that takes place every year as part of the world cup. As we comfortably arrive to Kranjska Gora, so we prepare to tackle the highest point of our trail. In the lower part of the Vršič mountain pass we will ride for some time on a road, and after passing Tonka's hut we turn left to an old road on which we can admire the master work of builders of old, who build the road on steep turns and twists all the way up to the mountain pass. This path was used during WWI. 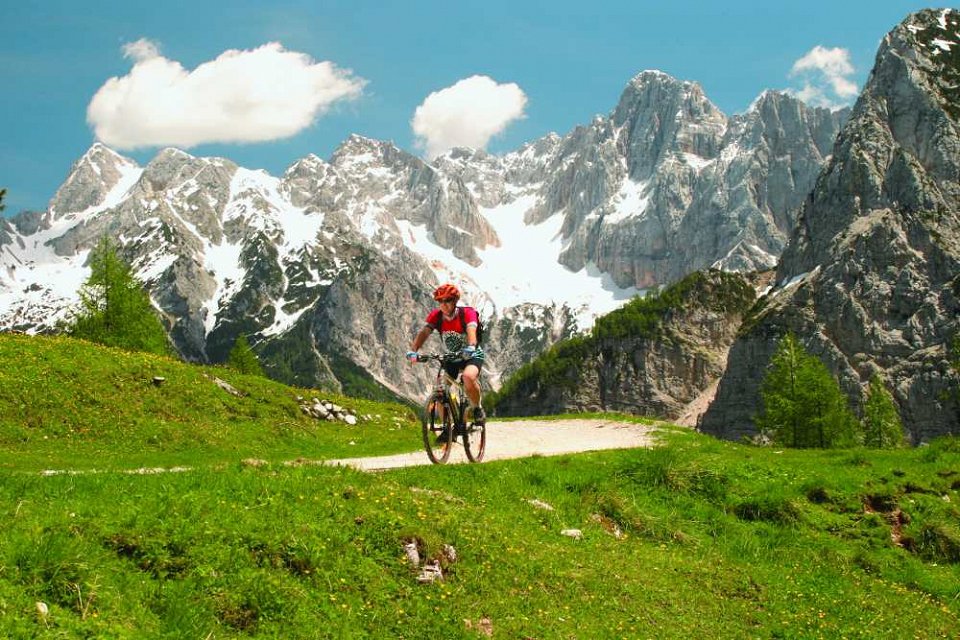 On top of Vršič, a long descent awaits us, and before tackling it we must make sure to check our disc brakes. The path to the mountain hut next to the source of the Soča river, where there is a shorter ascent, and then onwards across the upper Soča valley, leads us to a road that is sufficiently comfortable for cyclist to share with motor vehicles. From the village of Log and the magnificent Gorges, we arrive to Bovec partly on an unpaved path and partly on a road.

From Bovec we ride across the Soča valley to Kobarid (WWI Museum), and we may further animate our adventure by riding across mount Stol near Kobarid and add another 1,000 metres to our feat. 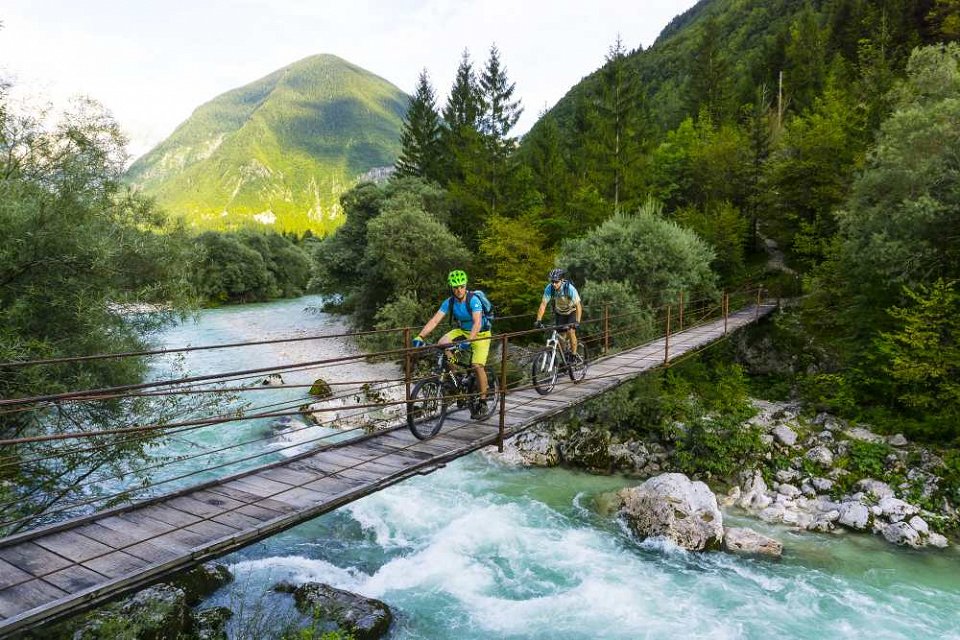 From Kobarid, we reach Tolmin through villages under the impressive mount Krn and through the battle fields of WWI and magnificent views. Just a few kilometres south, in the town of Most na Soči, we turn east into the Idrijca river valley. Just a little bit more, and we will completely close the loop around the Julian Alps. We will then ascend to the mystic Šentvid plateau, where we will take a break at the Flander tourist farm. We are now on the ridge of mount Porezen, the top of which we can reach on foot, and we then descend past the hut on the other side or we can decide to descend to Baška Grapa, from which we ascend again to the mountain pass on the Soriška planina mountain pasture and from there to Bohinj. From Bohinj, the original JBT trail crosses Pokljuka into the Radovna river valley where we started our journey. We may also afford one last expedition through the wild unpopulated forests of the Jelovica plateau, where there are two trails available (Outdooractive and map), straight toward Bled. There we can take a day or two to collect all the impressions that enriched us on one of the most attractive trips in Europe, if not the world. 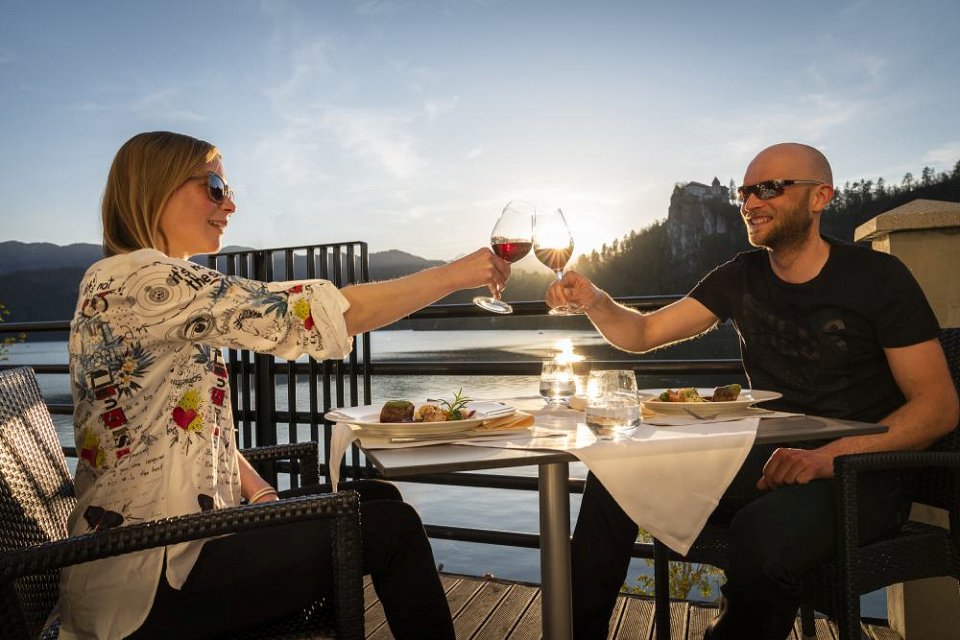 Ride only where it is allowed

Whichever path you take, follow the markings. When not on a marked path, ride on paths suitable for cycling. Riding on mountain paths that are not marked for cyclists (blue-white marking) is not permitted in Slovenia.