The Secrets of the Bled Cream Cake 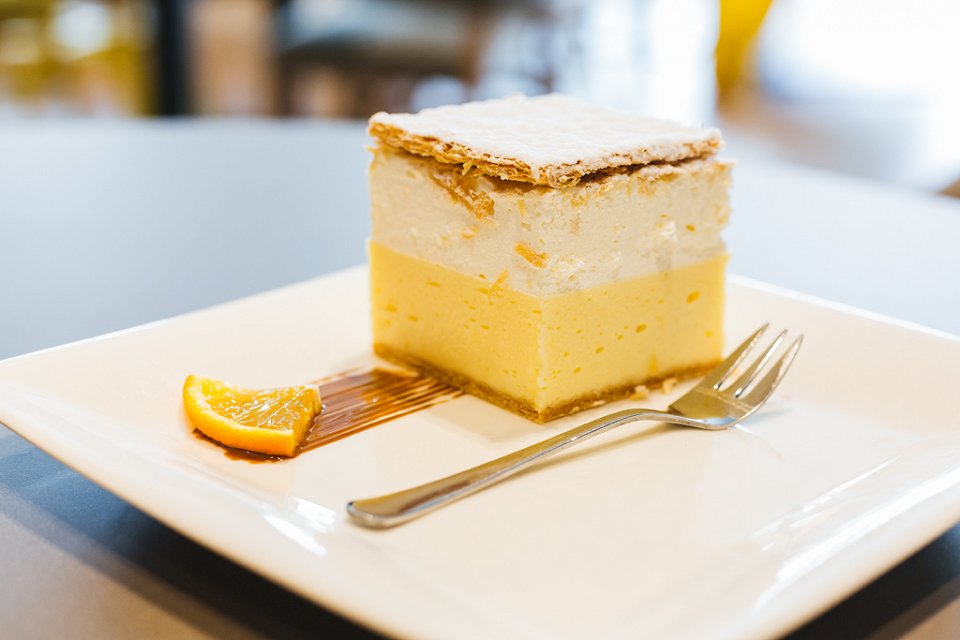 Cream cakes, known to Bled for decades, are in fact the symbol of Bled.

What about the original Bled Cream Cake, you’re wondering? Well, my father always likes to tell me that one dessert is never enough and so it is the Boris and I head to the center of Bled to meet Blaž Pretnar, the assistant of the director of Sava Hoteli Bled, at Kavarna Park. This was the mothership for Bled tourism in the mid-20th century and it is still the place that most tourists will end up, if not to stay, then at least for a slice of that famous cake. In 1953, the original Bled Cream Cake (called cremeschnittein German or kremna rezina in Slovenian) was developed by their own in-house pastry chef, Ištvan Lukačević. The hotel and cafe owner cleverly decided to launch a marketing campaign based around it, and to say that this worked would be a vast understatement. The cake became not only the symbol of the hotel’s cafe, but the symbol of Bled and one of the iconic desserts of Middle Europe, not just Slovenia. An estimated 15 million slices have been sold since 1953, but that may be conservative. Here, on a single hot summer day, they will sell 2000 slices of original Bled Cream Cake, with 650 consumed on a normal day. Each slice is exactly 7 x 7 x 7 cm square, featuring 2/3 vanilla cream and 1/3 normal cream, with phyllo dough on top and beneath. It is heavenly and light, though not in the calorie department, I’m afraid. Blaž jokes that each slice offers you 214 kilocalories (kcal), to be exact, but in case you're feeling guilty, it has been calculated that running one lap around the lake will burn off exactly that number of calories. What perfect symbiosis, to let you have your cake guilt-free.

Slovenians reading this are doubtless curious about rumors that have circulated that the recipe for the original Bled Cream Cake has changed over the years. But Blaž assures me that it has not. It is still made the same way Ištvan intended, and there are no secret ingredients. The key difference between the original Bled Cream Cake and the one that your grandmother makes you, or that you might buy in a shop, has one part to do with the relationship between the ingredients used and the method of preparation, and one part down to the fact that Bled Cream Cake at Kavarna Park is incredibly fresh. No slice that they serve will be more than 16 hours old. They have a full team of people preparing just this specialty, from 5 a.m. until 7 p.m. each day. The only nod to modernization is that they formerly employed three people full-time just to cut this confection, which is difficult to cut, since there are firm phyllo pastries above and beneath it, and you don't want to squish it when slicing. It should look like an aesthetically-pleasing cube, and it is very fiddly to slice nicely. They now allow a robot to do the work of those three full-time original Bled Cream Cake cutters (which always sounded like an odd job to advertise for in the want ads). It's just as good as ever and comes with a side order of one of the world's best views out the window of the café.

But there I am, enjoying my original Bled Cream Cake, having consumed a slice innumerable times (I want to be considered an upstanding foreign resident of Slovenia, so I figure eating lots of the national favorite pastries will help me in this) and, being the curious foodie that I am, I want to know what else the Kavarna Park offers. Turns out there is a lot more, and my new favorite dessert may not be the famous classic. I was delighted to try out an ice cream, dubbed sladogled (a play on the Slovenian word for ice cream, sladoled, which means “sweet ice,” and the verb “to see,” gledati, so it might translate as “ice cream with a view”). In 2017, Bled, with Sladogled was voted the world's best ice cream destination by some 4000 people judging an international competition. It is an ice cream unlike any I have ever had, in that it is more like a layer cake or a multi-faceted meal in a bowl in ice cream form. Quinoa ice cream is stacked with almonds, cinnamon and raisins, bound by mascarpone, but beneath lurks a surprise of chocolate ice cream, cocoa and a pinch of salt, kicked up with caramelized walnuts. I loved every minute of it and found it complex and subtle. Yet another reason to make a journey to the Kavarna Park. 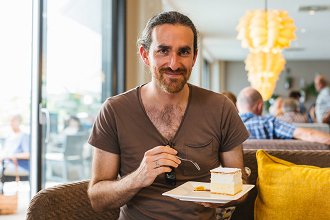