Discover the renovated Bled Castle and its surroundings

Our February posts about sustainability in Bled are dedicated to culture. Today we’re going to present one of Bled’s most inspiring stories – Bled Castle, a cultural monument of national importance.

Conservation, presentation, protection and compliant development of cultural heritage are essential components of sustainable management of every tourist destination. 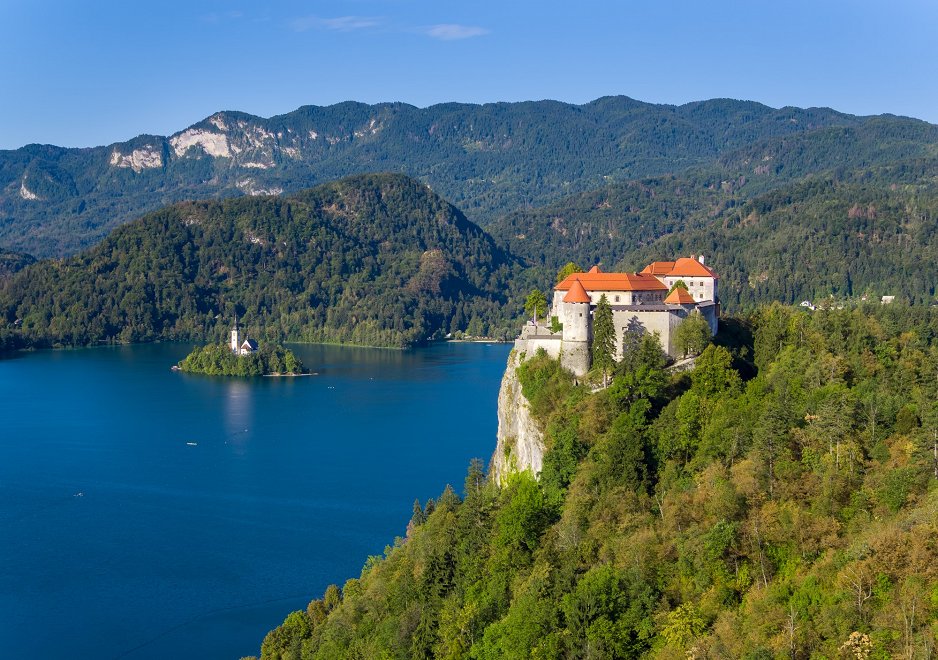 Bled Castle, spanning a history of more than one thousand years, is a cultural monument of national importance. The castle attracts over half a million visitors per year. Investment maintenance and renovations of such a structure are highly complex because the castle is a symbol of outstanding cultural heritage of Bled and Slovenia. The underlying aim of the 10-year renovation project was to protect this cultural monument from decay and negative impacts of tourism. The managing authority of Bled Castle, which is owned by the Republic of Slovenia, is the Bled Culture Institute.

Years of renovation are now in the past 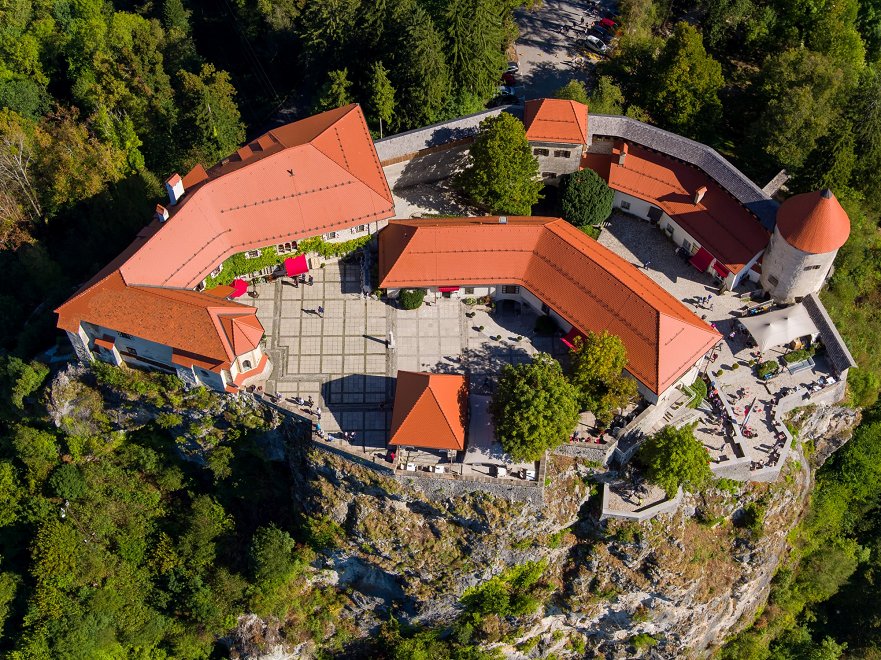 In 2007 the Bled Culture Institute adopted a 10-year strategic management plan in accordance with its management agreement, which specified all the needed renovation and restoration measures. In the scope of the project, installations at the castle restaurant and kitchen were renewed; most of the roofing was replaced; a new lightning protection system was set up on all buildings to mitigate the castle’s high lightning risk; floors on all three courtyards were renovated as were the stone surfaces on the courtyard walls; archaeologists and other experts studied part of the lower courtyard and the eastern wall of the building that houses the restaurant and the Knights’ Hall that also features some wall painting remains. The sewage system was fully reconstructed, the path to the castle was resurfaced using granite and widened to allow more pedestrian space, and green surfaces were replanted according to the planting plan. Over the course of the past ten years, the Bled Culture Institute invested over EUR 10 million into Bled Castle’s comprehensive renovation scheme, regular maintenance and other works. 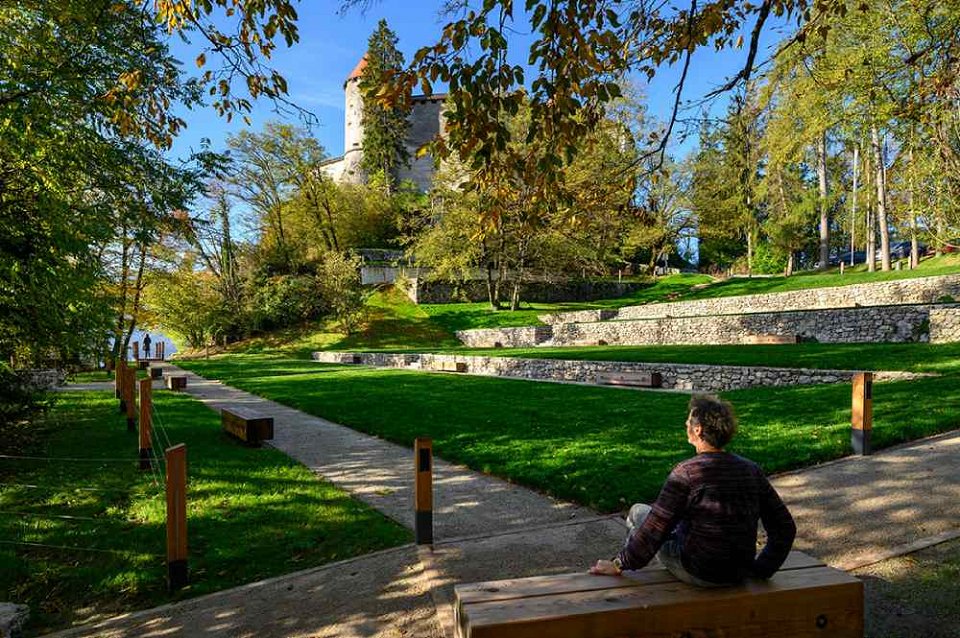 In 2019 the Bled Culture Institute embarked on its vision of renovating and restoring the extensive castle complex. The first action carried out in the in 2019 was the laying out of the castle park that was largely unplanned at the time and in a poor shape due to the massive tree fall of 2018. Given the sensitive nature of the area, extensive archaeological excavations were carried out simultaneously with the works in the park.

The investment comprised a complete restoration of all supporting walls of the castle, tearing down and rebuilding the structures to original dimensions, construction of 250 metres of new, partially-lit pathways, including a viewing platform and three stairways to facilitate passage over the park. New turf was laid down across nearly all the surface, old and decaying trees were removed and young trees were planted as specified in the acquired consents and the project plan. Finally, new benches were installed. The investment totalled just over EUR 300,000. The public tender for the works was awarded to the company Lesnina MG oprema d.d. Ljubljana, and the works were conducted according to the spatial regulation plan prepared by the Bruto Ljubljana and architect Matej Kučina.

Work was conducted under the supervision of archaeologists 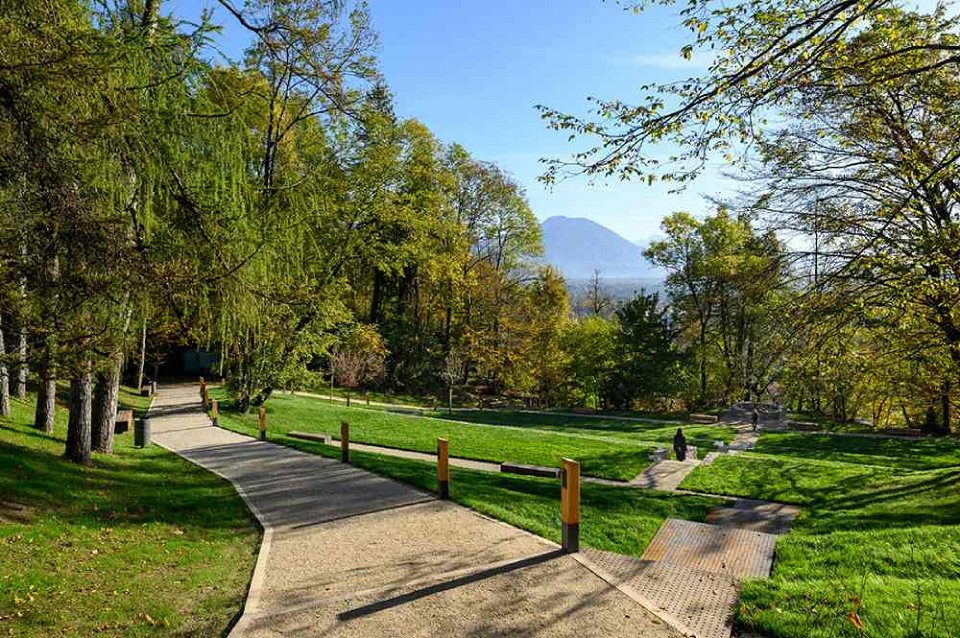 Owing to the special nature of the terrain, work was carried out under supervision of archaeologists of the Institute for the Protection of Cultural Heritage of Slovenia, who also conducted extensive excavations. The findings belong to different historic periods, which shows that the area was permanently settled. The finds include arrowheads, stone axes, Roman coins, ornaments and other findings currently held by Gorenjska Museum in Kranj. The will put on display as part of the archaeological museum which will be set up next to the Museum of Modern Arts at the Pristava site along the road to the castle.

The park, which completes the unique setting of Bled Castle, will be a place where visitors can rest before or after their castle tour, and as a venue for themed events.

A monument for another 1,000 years 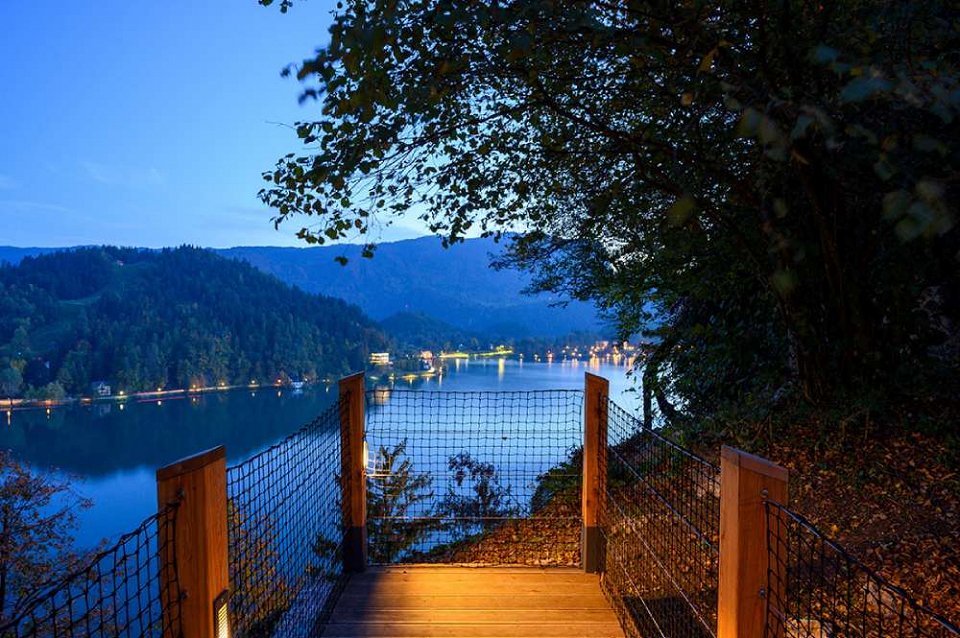 Bled Castle was renovated and fully restored, with all activities run in compliance with the guidelines for protection of cultural heritage. Following the completion of works, the focus shifted to the castle’s surroundings. The castle park has already been renovated, an elevator is to be built, and there are plans to restore the Mrak Homestead, a typical 17th-century house nearby. Also, construction of a major new facility is about to start at the foot of the castle hill: the Museum of Modern Arts was designed by the world-known British architect David Chipperfield.

The building permit for the Museum of Modern Arts in Bled

A few days ago the project reached a major milestone with the investor acquiring a building permit, which means that the construction can begin in early in spring.

As soon as the pandemic slows down, Artarhiv plans to arrange for David Chipperfield to visit Bled and present the project in-depth and in person to the interested public. The project is extremely high profile as it will upgrade Bled’s offer of cultural and tourist attractions and put Bled on the map of cultural travel in Slovenia and in Europe.